In response to the increase in social awareness about environmental issues, biodegradable plastics are getting more popular. Several types of biodegradable polyesters with different physical properties have emerged to replace traditional petroleum-based polymers. However, there is no efficient recycling strategy in place for most of these plastics. As a solution, we’ have developed a patent-pending, enzyme-based technology that not only enables efficient degradation of polyesters as a recycling approach, but may also serves as a platform to convert post-consumer waste to different value-added chemicals using genetically engineered bacteria. As opposed to a composting process, enzymatic hydrolysis of bioplastics generates carboxylic acids instead of CO2 as the final product.

Alternatively, polyester-hydrolyzing enzymes can be used for surface functionalization of bioplastics. Enzymatic hydrolysis of biodegradable plastics creates hydroxyl and carboxyl groups on the surface of polyester material without modifying the properties of the core polymer. The charged groups on the surface contribute to wettability of the polyester and therefore make it more biocompatible for medical and pharmaceutical applications. 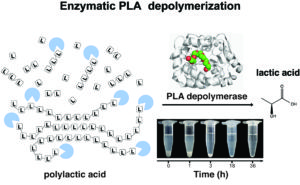